There were up to four finalists in each category and winners were selected based on submissions demonstrating the company’s scientific merit, market potential, innovation and ability to increase market credibility. Winners were announced at the NutraIngredients reception during Vitafoods Asia 2018 in Singapore. 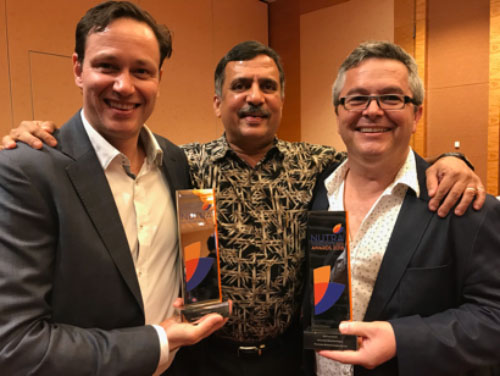 Founders of Pharmako Biotechnologies, Eric Meppem and George Kokkinis , graciously accepted the award along with R.V. Venkatesh, managing director of Gencor (Calif.) who is Pharmako’s North American partner and distributor.

“It is a great honor to receive both Start-Up of the Year award and Botanical Product of the Year award,” said Kokkinis. “We recognized the need to develop innovative technologies that would increase the solubility and bioavailability of lipophilic ingredients. Our technology LipiSperse® improves the functionality of hydrophobic agents like curcumin in a safe effective way, delivering a more potent product to the end consumer.”

Pharmako specializes in scientific research and innovative product development. Its other technologies include AquaCelle™, a Self-Micro-Emulsifying Drug Delivery System (SMEDDS) and Compressible Powdered Oils (CPO), a material which allows oily liquid active ingredients to be converted into powders.

The award winning ingredient, HydroCurc was also a finalist in two categories for the NutraIngredients USA awards earlier this year.